We just returned from a two-week vacation to Peru. The trip was filled with adventures and enlightening experiences. I’ve arrived home feeling energized and refreshed.

The first two days of our trip were spent in Barranco, a suburb of Lima. Barranco is a sleepy and somewhat bohemian area of the sprawling capital city. We stayed at a great B&B called Second Home Peru. Perched on a cliff overlooking the Pacific Ocean, Second Home Peru was once home to the noted Peruvian artist Victor Delfin, whose artwork is on display throughout the premises. His daughter, Lillian, now rents out 5 rooms on the property to guests. The place was simply amazing and the staff was extremely hospitable. 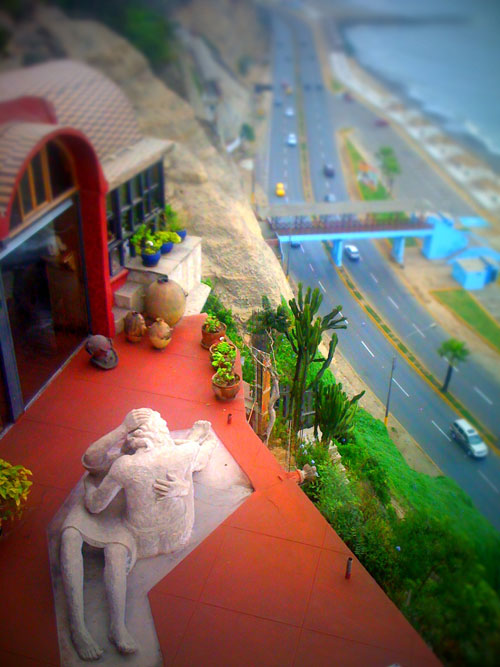 One of Delfin's sculptures, as seen from the balcony of our room.

Our first day was all about food. We participated in a one-day culinary excursion through Pica Peru. The four-hour class began with a tour of a market in Miraflores, where we learned about and sampled Peru’s local produce. Our guide and instructor was chef Carlos Otero. Otero has owned restaurants in Lima, Caracas, and Miami, but now he’s an instructor at three of Lima’s most important culinary schools. His knowledge, experience and relaxed demeanor provided a highly enjoyable and educational experience.

After the hour tour of the market, we went to Otero’s apartment for the actual cooking lesson. We made an amazing three-course meal that included ceviche, fish cau cau, and causa; all prominent Peruvian dishes. There’s nothing quite like cooking a delicious meal and washing it down with pisco sours, Peru’s national cocktail! The cooking class was memorable and we are determined to cook these and other Peruvian dishes at home (scored a signed copy of Otero’s cookbook, which is fortunately in both English and Spanish).

On day two, we went on a 15-mile mountain bike tour of the Pachacamac region outside Lima. The tour, led by Jaime of Peru Bike, meandered along trails near several archeological sites and the neighboring farmland. The singletrack trails along the irrigation canals were insane but fun!

After working up a serious appetite, we hopped a cab to Miraflores to grab lunch at renowned Peruvian chef Gaston Acurio‘s La Mar. Again, we enjoyed ceviche, causa and pisco sours. The food was delectable and the restaurant had great atmosphere. Yeah, we are definitely fans of ceviche. Sadly, despite all of the sushi restaurants in the U.S., there are seemingly few cevicherias. Hmmm…

The remainder of our day was spent exploring Barranco. We never did make it into downtown Lima. It would have been nice to see some of the city and its landmarks, but we had limited time and we stuck to our priorities.