After spending a couple of days in Lima, we departed for Cusco and the Sacred Valley of the Incas. We decided to spend the first couple of days in Pisac, a small village approximately 30km from Cusco. Pisac is best known for its markets that feature Andean handicrafts.

Our primary reason for staying in the village was to begin acclimatizing to the higher elevation. On average, the altitude of Lima is 433 ft. Cusco’s elevation is approximately 10800 ft. That’s some serious gain. Pisac is slightly lower than Cusco, with an average elevation of 9514. Speaking to this, we thought it would be best to acclimatize slowly and begin at a slightly lower elevation before heading to Cusco.

Pisac is a relatively small and sleepy village. The market, located in the plaza de armas, is really the hub of activity. In the off season there are two smaller market days during the week and a large market on Sunday. However, during our stay there were stalls setup everyday and a massive market on Sunday. Few handicrafts caught our eye, as much of it seemed redundant and not unique. Also, many textiles were produced with acrylic as opposed to alpaca or other traditional fibers.

Though, I will admit that it was fun to watch bus load after bus load of gringo tourists arrive to shop the stalls. One morning we were perched on the hotel balcony watching the locals setup their handicrafts. From one corner of the plaza I heard house music bumping from a sound system. From the other corner we heard Beyonce’s Single Ladies playing. Within minutes of the first bus arriving, the music was killed and traditional Andean music stated playing! Hilarious! This, coupled with the gringos posing for pictures with Andean women in traditional garb, made me cringe. So much of my professional work is to combat this type of cultural “othering,” and there I was witnessing it happening before my eyes. 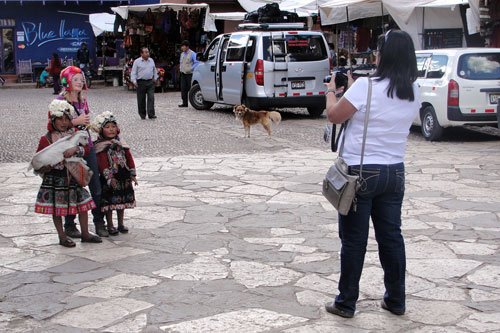 A Classic Case of "Othering"

Our accommodations, the Pisac Inn, was really great. The small hotel is conveniently located right off the plaza de armas. The family-owned business has a vested interested in preserving the cultural heritage and looking after the social welfare of the local Quechua people. Quite inspiring. So, in addition to feeling good about our hosts, we were delighted with the quality of the hotel. The staff was friendly and accommodating and the food was outstanding. It was here that I tried my first alpaca steak (delicious!), coca tea and chicha morada.

We didn’t do a whole lot in Pisac besides visit the market. We took things slow because of the elevation. Dharma and I both experienced trouble sleeping and some minor headaches due to the altitude. However, we did make time to hike the Incan ruins at Pisac. I wasn’t feeling so hot and we made the mistake of following a group of Aussies along a trail that turned out to be… not a trail. We eventually managed to find the right trail, but not before I fell off the side of a small cliff. Fortunately I caught myself and only managed to bang up my knee and collect an armful of slivers from a bush.

Here are some photos from our stay in Pisac.