City/Cité: An Exchange on Urban Democracy

Earlier this month I had the opportunity to represent the Arab American National Museum at the City/Cité convening in Paris. It was an inspiring program and I was honored to be part of an incredibly talented delegation of professionals representing the US. In addition to sharing how the AANM works to uplift communities through arts & culture, I had the opportunity to meet with like-minded institutions in Paris to explore the potential for collaboration. This included the Cité Nationale de l’Histoire de l’Immigration and the Institut du Monde Arabe. I’m optimistic about the possibilities. Here’s more on the City/Cité program:

At a time where shockwaves of the Brexit and US elections extend to the other side of the Atlantic in a context of worldwide political crisis, City/Cité brings together researchers, policymakers, city architects, activists, artists, and journalists in a transatlantic dialogue on the past, present, and future of urban democracy.

After the 2015 launch of City/Cité in Chicago and before the next stage that will take place in Detroit in 2017, this Paris edition turns to the issue of “neighborhoods”. The two days of events at CentQuatre-Paris and Maison de la Poésie offer a space for exchange and reflection on ways to promote social inclusion and political participation in neighborhoods, and to identify best practices for social justice. Beyond the immediate objective of establishing an international network of artists, researchers, local figures, and activists, the project aims to create a Franco-American commission on urban development policy. 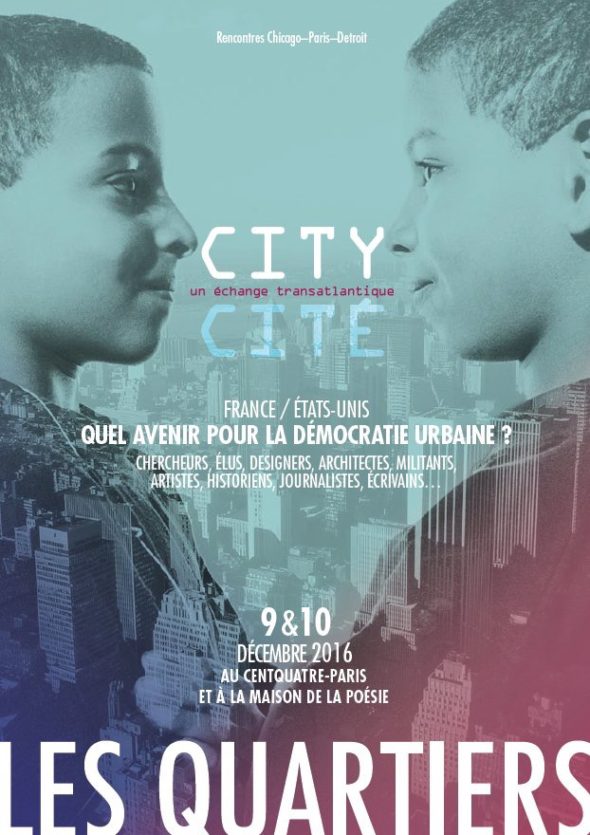 Advertisement for City/Cité in Paris

I need to express my heartfelt gratitude to the French Embassy in the US for organizing City/Cité. Not only was it an insightful program, but it also served to foster stronger relationships among the participants. I’m very much looking forward to the next installment of City/Cité, which will take place in Detroit in 2017.